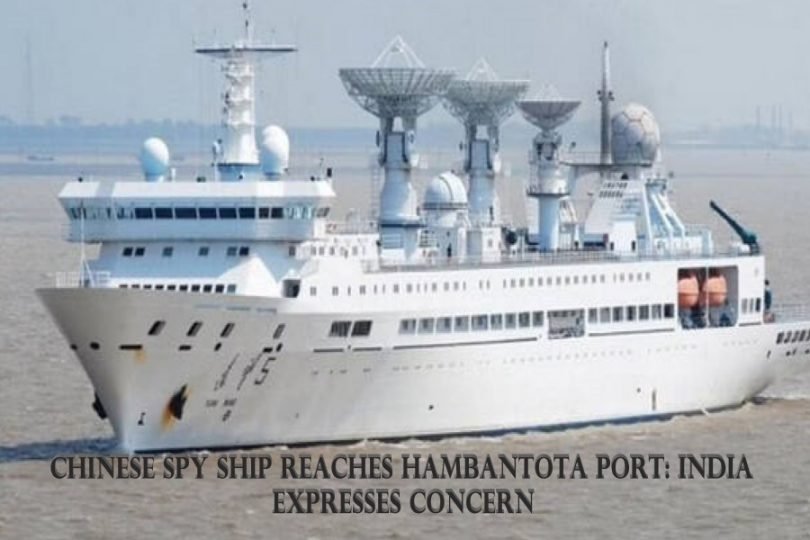 Colombo: China’s spy ship Yuan-Vogue-5 has reached Sri Lanka’s Hambantota port on Tuesday. The ship was on its way to Hambantota when India and the US raised concerns over it. The aircraft, which tracks satellites and intercontinental ballistic missiles (ICBMs), will remain in Hambantota till August 22.

Observers say the permission may have been given under pressure from China. However, Chinese Foreign Minister Wang Wenbin is completely silent on this.

Everyone knows that China is spreading its claws in the Pacific Ocean as well. It has been targeting Taiwan by flying fighter jets over it and intercepting its cruising naval vessels. After the visit to Taiwan by House of Representatives Speaker Nanxi Pevosi and the then US lawmakers, China has really accepted. He does not want to create a disturbance in the Pacific Ocean. So now China wants to spread its claws on the Indian Ocean by creating confusion in the Indian Ocean, on the other hand it is determined to establish its influence in Sri Lanka and India and Malaysia, Indonesia and Maldives. In South East Africa and Iran, Arabia and West. He knows the whole world.

But China clarified after some time that it has taken this step considering its defense sector. Therefore, this matter is an internal matter in which it is absolutely inappropriate to interfere.

However, observers say the move is an internal matter for China.

Actually, Sri Lanka has taken a huge loan from China. So earlier this port had to be leased to China. Which was stopped due to opposition from Indo-US and Australia. Hambantota is the most important port in South Sri Lanka after Galle. Its geographical position is such that the entire Indian Ocean can be seen from there. So if any Chinese spy ship comes to that port then India, Australia and America cannot act. Exclusive: So India’s defense system may be affected. Earlier, Chinese naval ships used to collide with ‘Geda’ in the Indian Ocean. India has also opposed it.