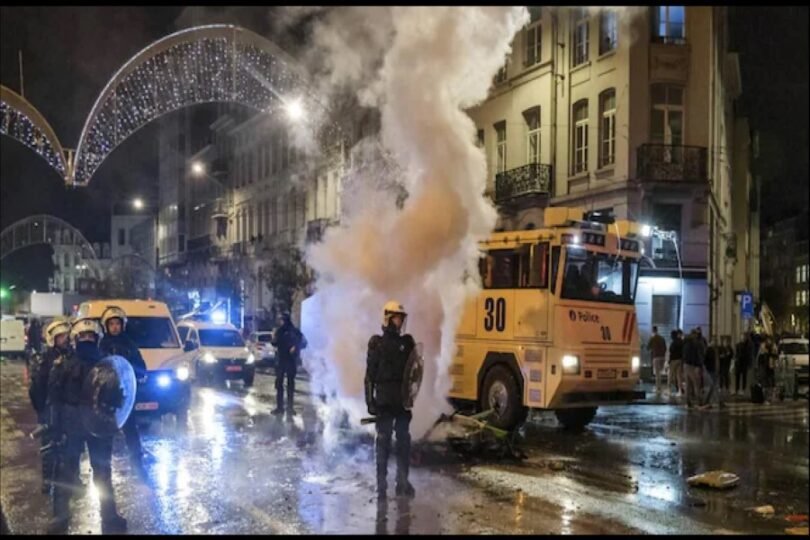 Belgium football fans could not digest their loss to Morocco in the FIFA World Cup 2022. As a result, the real impact of that defeat has been seen on the streets of Brussels, with violence erupting after Morocco’s victory over Belgium on Sunday in a FIFA World Cup match in Qatar. The Belgian police then detained and arrested a dozen people. On the other hand, protesters set fire to a car and several electric scooters in Brussels. There were reports of riots breaking out in several places in Brussels which the police had to struggle to control.

Riots broke out in dozens of locations in the Belgian capital, some of which saw football fans draped in Moroccan flags. On the other hand, the police fired water cannons and tear gas shells to control the crowd. Police spokeswoman Ilse van de Keere said the situation is currently under control and vigilant police patrols are underway in areas where violent clashes have taken place.

Brussels Mayor Philippe Claus has advised people to stay away from the city centre. He said that police officials are doing their best to maintain law and order on the roads. Police had to stop metro and tram services there as a precautionary measure due to security reasons. The gates of metro stations were closed and police patrols were increased in the streets to stop the violence from spreading.

A journalist was injured

Police said the protesters used pyrotechnics, projectiles and lathis and set fire to the public square. A journalist was injured on the face due to fireworks. Police used water cannons and tear gas to quell the riots and quell the rioters. The police are keeping a constant watch on the miscreants in these areas. The police fear that an atmosphere of unrest may arise in the city again. Along with this, the police are also interrogating the people who have been taken into custody. Police are trying to find out the exact reason behind the riots and who is behind it.